Characterizing the seasonal variability of hypolimnetic mixing in a large, deep lake 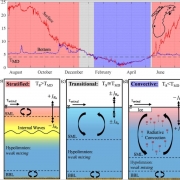 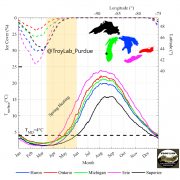 In this work we highlight the importance of radiative convection as a mixing mechanism in a large, ice-free lake (Lake Michigan, USA), where solar heating of waters below the temperature of maximum density drives vertical convection during the vernal turnover. Measurements taken over a 2-week period at a 55-m deep site demonstrate the ability of radiative convection to mix the entire water column. Observations show a diurnal cycle in which solar heating drives a steady deepening of the convective mixed layer throughout the day (dHCML/dt = 12.8 m/hr), followed by surface-cooling-induced restratification during the night. Radiative convection is linked to a dramatic enhancement in turbulence characteristics, including both turbulent kinetic energy dissipation (ϵ: 10−9–10−7 W/kg) and turbulent scalar diffusivity (Kz: 10−3–10

Near-bed measurements are reported for both mean flow and turbulence structure in the deep hypolimnetic waters of Lake Michigan (55 m depth) during stratified and unstratified periods to determine validity and restrictions of the expected law-of-the-wall (LOW) behavior. Near-bed currents were weak (U50 = 3, 16 cm s−1 for mean, maximum currents respectively at 50 cm elevation), dominated by subinertial energy across all seasons, and showed little seasonal variation in spite of the strong seasonality to wind forcing. Velocity structure for wave-free conditions showed strong log-linear trends within 1 mab, with over 98% of the 2152 velocity profiles producing significant log-linear fits within the bottom meter and a strictly logarithmic velocity profile extending to only 66 cmab on average (Cd 50 = 0.0052; zo = 0.0015 m). Stratification was dynamically unimportant to mean flow and turbulence, but fitted log-linear length scales suggest that deviations from strictly logarithmic velocity structure may be explained by flow unsteadiness. Turbulent quantities measured within 1 m of the bed including dissipation, turbulent kinetic energy, and turbulent length scales followed LOW expectations in the mean, but individual estimates deviated by several orders of magnitude. The observed deviations from LOW turbulent structure were found to be correlated with the log-linear length scales fit to mean velocity profiles and were consistent with the effects of flow unsteadiness.

Invasive dreissenid mussels have altered plankton abundance and nutrient cycling in the Great Lakes. In this study, a 1-D hydrodynamic-biogeochemical coupled model is developed to investigate their effects at a mid-depth offshore site in Lake Michigan. Model simulation shows that water surface temperature and vertical thermal structure can be well reproduced. Driven by the simulated vertical mixing, the biological model solves the transport and transformation of nutrients, plankton and detritus in the water column. Mussel grazing and excretion are added at the bottom boundary. The biological model predicts a notable decline of phytoplankton biomass and considerable increase of dissolved phosphorus (DP) in the entire water column at the end of spring. However, the reduction of phytoplankton and the increase of DP are limited to the bottom 20 m in summer as a result of the strong stratification. Model results also show that mussels can maximize particle delivery to the benthos, as the modeled benthic diffusive flux of particulate phosphorus exceeds the passive settling rate by 4.2× on average. Model simulation over a 10-month period indicates that profundal mussels have the potential to significantly change the distribution of energy and nutrients in the water column, even in a deep and stratified environment.

The characteristics of the bottom boundary layer are reported from a Lake Michigan field study carried out in deep hypolimnetic waters (55 m depth) during the stratified period (June–September 2012). The sandy substrate at the measurement site was densely covered with invasive quagga mussels (mean size: 1.6 cm; mean density: 10,000 mussels m−2). The measurements reveal a sluggish, compact bottom boundary layer, with flow speeds at 1 mab less than 5 cm s−1 for most of the period, and a dominance of subinertial energy. A downwelling event caused the largest currents observed during the deployment (10 cm s−1 at 1 mab) and a logarithmic layer thickness of 15 m. In spite of the weak flow, logarithmic profile fitting carried out on high-resolution, near-bed velocity profiles show consistent logarithmic structure (90% of profiles). Flow was dominated by subinertial energy but strong modified by near-inertial waves. Fitted drag coefficients and roughness values are Cd1m = 0.004 and Z0 = 0.12 cm, respectively. These values increase with decreasing flow speed, but approach canonical values for 1 mab flow speeds exceeding 4 cm s−1. The estimated vertical extent of the logarithmic region was compact, with a mean value of 1.2 m and temporal variation that is reasonably described by Ekman scaling, 0.07 u*/f, and the estimated overall Ekman layer thickness was generally less than 10 m. Near-bed dissipation rates inferred from the law of the wall were 10−8−10−7 W kg−1 and turbulent diffusivities were 10−4−10−3 m2s−1.